New To The Church Menu 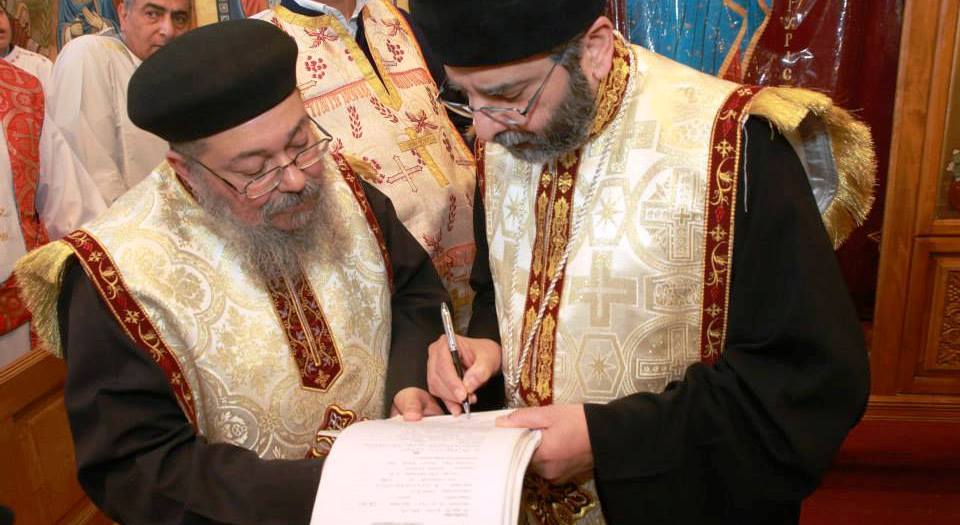 Born in 1957, Father Ishak (Isaac) Henien (left) was a reader in the Faculty of Commerce in Cairo and in the Theology College in Cairo. Before working as a customs official in Cairo International Airport, but his real passion was in serving his local parish St. George Church in Shobra, Cairo. This lead him two complete two further degrees at the Institute of the Holy Bible and the Institute of Shepherdship. His dedication and gentle manner made him a popular church member and was ordained a priest on 15th April 1987. On the 7th June 1995 he was called to serve outside of Egypt in our parish in Croydon. He has shepherded our community since then as a true example of Christ. He is married to tasoni Odett and has three children all active in the church.

Born in 1952, Father Kyrillos Asaad (right) graduated as a doctor from the University of Ain Shams Medical School. After specialising as an Obstetrician & Gynaecologist, he moved to the UK and obtained the Fellowship of the Royal College, then to the UAE before returning to the UK with his family in 2004. He served St. Mary & St. Shenouda's Church in many ways, as an epideacon (subdeacon), the leader of the youth and Sunday School. Because of his compassion and kindness the youth grew to love him and was voted to be a new priest for the youth.  On Sunday 16th of November 2014, His Holiness Pope Tawadros II ordained Fr Kyrillos to serve alongside Fr Ishak, who was elevated to the the rank of Hegomen. On Wednesday 3rd of December 2014 Fr Kyrillos prayed The Liturgy of Receiving The Sacrifice in which he prayed his first liturgy as the serving priest at Anba Bishoy Monastery where he spent his 40 days. He was welcomed back to his Church on December 31st 2014 and now serves under the guidance of Fr. Ishak.

Our Church is one of the oldest Coptic Churches in the UK it was established as a sister church to St. Marks Coptic Church, Kensington in 1988 to serve the growing Coptic community. Since then our church has grown consistently serving some 200 plus families. We have had a close personal relationship with the late Pope Shenouda III and many Bishops and priests have come to assist us in the service of the church, none more that HG Bishop Angaelos who resides in the Coptic Centre in Stevenage but has a close affiliation and bond with many of the congregation, which we pray will last many more years to come.

We have a church council who are officially responsible for the upkeep and maintenance of the church. They can be contacted by following the link at the bottom of this website. Our church prides itself on having a very relaxed and homely feel and indeed most members of our church would say that it feels very much like a big family.