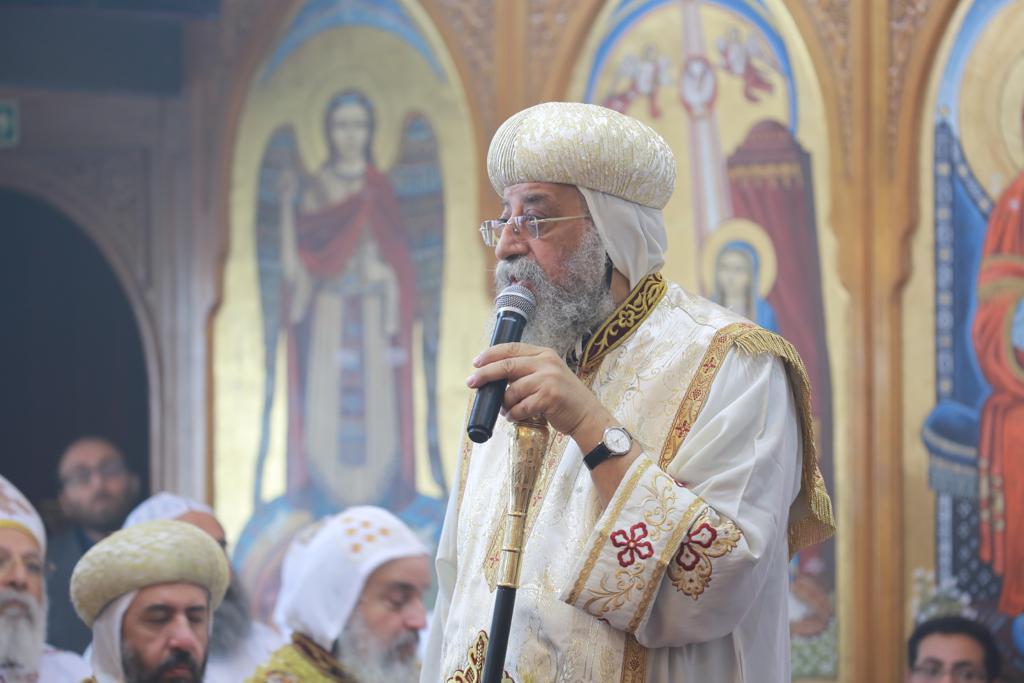 In the name of the Father, the Son and the Holy Spirit, One God Amen.

"Christ has risen, truly He has risen"

"Thanks be to God who always leads us in triumphal procession in Christ and who makes known through us the fragrance that consists of the knowledge of him in every place." (2 Corinthians 2:14)

On behalf of the Coptic Orthodox Church, The Holy Synod and all the Copts of Egypt worldwide, I would like to congratulate Your Holiness on Your divine appointment as Pope and Bishop of Rome. It is one of the highest offices in the Christian community, but also of immense relevance worldwide, particularly in the current historical phase when inter-religious dialogue has become so important.

Being guided by the Holy Spirit, I deliberately wanted this visit to coincide with my congratulations to Your Holiness, in the 40th anniversary of the visit by His Holiness, the Late Pope Shenouda III, the so-called Pope of the Arabs and the Pioneer of the Enlightenment Movement in the Coptic Orthodox Church, to Pope Paul VI, from the 4th until the 10th of May 1973 (the day when the two Popes signed the Joint Statement), in the Vatican City, the ﬁrst visit ever paid by the Pope and Patriarch of the Coptic Orthodox Church in Alexandria to the Vatican. In this year I was still studying at the Faculty of Pharmacy at Alexandria University in Egypt. It may be worth noting that, as a response to that visit, His Holiness Pope John Paul II visited Egypt in 2000.

Thus, this is an unforgettable occasion for me, both for its great inherent importance and for its marking the anniversary of the historical and most signiﬁcant event by Pope Shenouda III. May this visit of love and brotherhood be the ﬁrst of a long series between our two great Churches. Therefore I propose that the 10th of May of each year should be considered as a celebration of brotherly love between the Catholic Church and the Coptic Orthodox Church.

As my first trip ever outside Egypt after enthronement last November, I'm visiting Your Holiness coming from Egypt, “the Nile Country”, a huge land with a wonderful geographical location. My Country is the place where the most ancient culture in the world was born, the Pharaonic Civilization. But it is not only this. Egypt is the birthplace or the setting of many other important Civilizations of antiquity: the Greek, the Roman, the Coptic and finally the Islamic.

Egypt has witnessed divine signs like no other place on earth.  As the Prophet says, “Out of Egypt, I have called my son” and "Blessed be Egypt my people". A number of prophets and saints were born and lived in Egypt, a country well renowned for its religious coexistence.

Over a span of time of more than three years, the Holy Family visited Egyptian villages and governorates moving from East to West and from North to South, thus making the whole country blessed with the sign of the Holy Cross. And Jesus Christ made its soil sacred by treading on it. Later on, in the early years of Christianity, St. Mark the Evangelist spread the Christian doctrine through Egypt and was martyred in Alexandria, the city of Alexander the Great, also known as “the Mediterranean Spouse”.

My Coptic Church is a very ancient one, with a history that spans over more than nineteen centuries. It was founded by St. Mark the Evangelist in the 1st. century and in the course of time it has been irrigated until now with the blood of numerous martyrs, thus becoming stronger and stronger.

Christian Monasticism originated in Egypt by the great St. Anthony, the so-called Father of all monks, who established the practice of monastic life. Later on, the practice of common life established by St. Pachumius, who was born in Upper Egypt in the middle of the 3rd century, was extended from Egypt to the rest of the world. Monasticism was instrumental in the formation of the Coptic Orthodox Church.

The Copts have grown in the world, as a solid religious entity with a clear Christian character. Doubtless the contribution of the Coptic Orthodox Church is great and many. The patriarchs and popes of Alexandria played a leading role in the Christian theology.

I would like to emphasize that the relationships between Italy and Egypt are utterly solid and long- established, spanning over more than two millennia. The two countries can boast marvelous Mediterranean civilizations and human heritage that make them unique in the world.

Therefore, Italy has a great place and worth in our hearts. It is mentioned also in the Holy Bible, in the Epistles of Paul of Tarsus, the apostle that, in the 1st. century of Christianity, together with St. Peter established the seat of the Christian Church in Rome, the town where they both were also martyred. Approximately in the same years, the apostle St. Mark established the seat of the Christian Coptic Orthodox Church in the town of Alexandria.

The Coptic Orthodox Church and the Catholic Church are strongly interconnected. They have always worked together since the early ecumenical councils (going back to the first Nicaea Council in 325 A.D., when the “Nicene Creed” was formulated in the fourth century, with the contribution of the courageous deacon Athanasius, the youngest Pope of the Coptic Church and the so-called "Protector of the Faith").

The greatest witness of the strong relationships between the two Churches is the foundation of our two Dioceses in Italy: Bishop Barnaba in Turin and Bishop Kiroulos in Milan who are the Ofﬁcial Representatives of the Coptic Orthodox Church, taking care of all affairs of the Copts, which number is always increasing.

Everyone here praises the love, the fruitful cooperation and the great support of the Catholic Church to the Egyptian Church founded in your beautiful Country. Both Churches, the Catholic and the Coptic, have always worked together, in the Middle East and in the Western World, to make peace prevail. The most important aim for both is the promotion of ecumenical dialogue in order to get to the most pursued goal, unity. Therefore and for the ﬁrst time ever, I insisted to participate personally in the Enthronement Ceremony of the Patriarch of Catholic Church in Egypt, Patriarch Ibrahim Isaac. Last February, we also formed the Council of Churches in Egypt with the participation of all Egyptian Churches, as an expression of solidarity and love between brothers.

I am proud of my beloved Country, Egypt, "the Homeland which lives inside us” as His Holiness Pope Shenouda III used to say, and I am honored and very glad to be here in the Vatican.  Despite its being the smallest country in the world, it is the most important country for its great inﬂuence and Holy Service. The Vatican Museums and libraries contain stunning artistic treasures that bear witness to the excellence of man’s genius over the time. Finally, it is important to stress the fundamental role the Country plays in the ﬁeld of ethics and its constant efforts in building peace on earth.

I will end my speech by wishing that the excellent relationships between the Coptic Orthodox Church and the Catholic may become stronger and more prosperous. Working together to promote ecumenical dialogue and peace on earth will be our mutual aim. May our Lord help and support Your Holiness in Your Holy mission.

I hope I can soon be honored by the visit of Your Holiness in my beloved country, Egypt. Once again, the entire Coptic Church, the religious communities and the Egyptian people express their utmost joy and delight to Your Holiness.

Finally I would like to thank Your Holiness for the kind hospitality and may the peace of the Lord be with you all. Ci vediamo in Egitto.