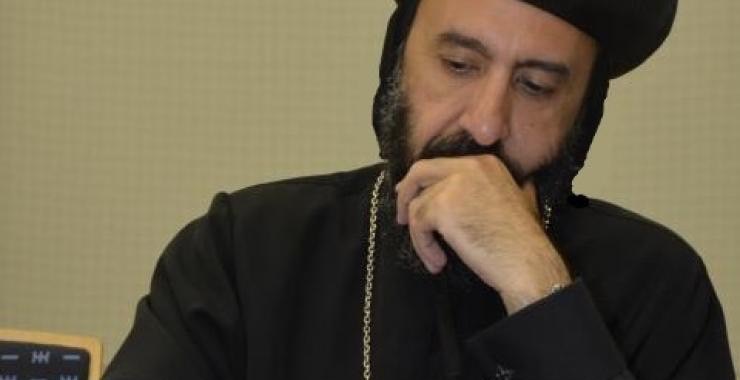 The Lambeth Cross for Ecumenism was conferred upon His Grace Bishop Angaelos, General Bishop of the Coptic Orthodox Church in the United Kingdom, by the Archbishop of Canterbury, the Most Reverend and Right Honourable Justin Welby, on 31 March 2016 at Lambeth Palace. The Lambeth Cross has been the highest honour bestowed by the Archbishop of Canterbury since 1939 and is conferred to distinguished hierarchs who have rendered exceptional services to the cause of Christian unity.

Speaking directly to Bishop Angaelos in an interview after conferring him with the Lambeth Cross the Archbishop said:

“My encounter with Orthodoxy through you has been a really profound experience in my life. It has changed much of my understanding of what the Church is universally. I have never had that much engagement with Orthodoxy, and certainly not with Coptic Orthodoxy. I found a completely different understanding, a much deeper sense of being drawn into the Body of Christ, and this is a recognition of the importance of your role in presenting to the United Kingdom...

Read the full press release with photographs via http://www.CopticMediaUK.com

Days before, the prestigious Coventry Cross of Nails was also awarded to UK Coptic Bishop.

HG Bishop Angaelos, General Bishop of the Coptic Orthodox Church in the UK was presented with the award during the Easter Sunday service.

The Coventry Cross of Nails is recognised throughout the world as a symbol of peace and reconciliation. Although it has been awarded to hundreds of charities and organisations over many years, it is only rarely presented to individuals.

The cathedral said Bishop Angaelos is widely known for his extensive advocacy work. As a result he was conferred with an OBE by Her Majesty the Queen, for ‘Services to International Religious Freedom’ in October 2015.

A catehdral spokesperson added: “He frequently issues statements and comments relating to current religious and minority issues, with his particular focus on dialogue, conflict-resolution, and reconciliation.

“His comments and views are often sought on matters of human rights, civil liberties and international religious freedom, particularly in relation to the situation in Egypt, the Middle East, and North Africa.”