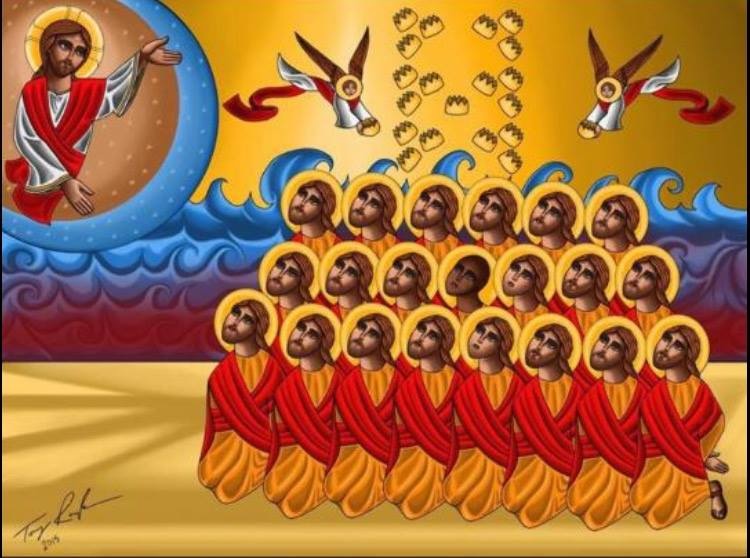 Our hearts go out to the families of the 21 Coptic Christians who were murdered in Libya by ISIS on 15th of February 2015. Their courage and strength will not be forgotten. ISIS released that video to scare us Copts and Christians away from our faith, but little do they know that it is because of martyrs that our church and faith is strengthened.

But he said to me, “My grace is sufficient for you, for my power is made perfect in weakness.” Therefore I will boast all the more gladly of my weaknesses, so that the power of Christ may rest upon me. For the sake of Christ, then, I am content with weaknesses, insults, hardships, persecutions, and calamities. For when I am weak, then I am strong.(2 Corinthians 12:9-10)

Matthew 5:10 "Blessed are those who have borne persecution in the cause of Righteousness, for to them belongs the Kingdom of the Heavens.

We ask please remember them in your prayers.

Reports suggest that Lybia and Egypt have launched air strikes against ISIS after the posting of the video. Let us remember to not get caught up and consumed with anger and hate for the Lord tells us "love your enemies and pray for those who persecute you,that you may be children of your Father in heaven." (Matthew 5:44-45)

The Right Honourable David Cameron Prime Minister spoke by telephone with His Grace Bishop Angaelos, General Bishop of the Coptic Orthodox Church in the United Kingdom to offer his condolences following the death of Coptic Christians murdered in Libya.

The Prime Minister issued a statement today expressing concern over the tragic and brutal loss of life in Libya, deeming the attacks as “barbaric and inhumane”. During the conversation the issues of dehumanisation and the importance of maintaining human dignity were discussed.

“It was gracious of the Prime Minister to call personally in the midst of his numerous responsibilities expressing his condolences to myself and our community. I felt that this was both a personal and powerful gesture, demonstrating his concern and sadness at the senseless loss felt by families and communities in Egypt.

As discussed with the Prime Minister, I will be passing these sentiments to His Holiness Pope Tawadros II, our Holy Synod and the Coptic Orthodox community here in Britain.”

Following the attacks in Libya, Bishop Angaelos issued a statement saying, “We cannot remember our Coptic brothers without also remembering all those who have lost their lives in equally brutal circumstances: journalists, aid workers, medical staff, religious leaders, a young pilot and communities that are considered incompatible with a fringe and intolerant element.”

Statement from Priminister of Canada

Prime Minister Stephen Harper today issued the following statement after learning that up to 21 Egyptian Coptic Orthodox Christians had reportedly been beheaded in Libya by groups linked to the so-called Islamic State of Iraq and the Levant (ISIL):

“I am outraged and saddened by the beheadings of Egyptian Coptic Orthodox Christians in Libya by groups linked to ISIL. Coming soon after the savage burning of Royal Jordanian Air Force pilot Moaz al-Kasasbeh, the threat posed by ISIL could not be clearer.

“On behalf of all Canadians, I offer my deepest condolences to the families and friends of those killed and to the Coptic community here in Canada, who will feel the loss especially grievously.

“Canada is proud to stand with its coalition partners in the fight against ISIL. We will continue to stand firmly together against these terrorists who threaten the peace and freedom we hold so dear at home and that we wish for those abroad.

“Barbaric acts such as this do not shake our resolve but, rather, confirm the rightness of our cause and the vital necessity of our mission against ISIL. We will not be intimidated.”

Statement from bishops around the world

Hate is the most vile word in the human language. The evinced repulsive upshot of hate lingers on and on in the Middle East by the terrorist faction Daash who recently abducted twenty-one Copts in Libya to march them to their death. This revolting scenario has become all too customary for these extremists to accomplish such hideous crimes against all of humanity. We are all-every race, religion, tribe, and nation, God's creation by His own hands and with His own breath. The Copts are a strong and peaceful people, trusting in God's mercies and will. As we, the Copts, approach the Holy Great Fast, we humble ourselves before the Lord and remain confident that He will hear our prayers, respond to our supplications, save His children, end the atrocities in this region, and bring justice to the world.

"Lord, You have heard the desire of the humble;
You will prepare their heart;
You will cause Your ear to hear,
To do justice to the fatherless and the oppressed,
That the man of the earth may oppress no more."
Psalm 10:17-18

The Coptic Orthodox Diocese of New York and New England grieves the heinous execution of 21 young men in Libya at the hands of the terrorist group that has called itself Islamic State. The brutality of this mass murder of innocents, combined with the inhumane way in which this group has sought to sensationalize its message of hate to the world, has struck the global community at its core, and drawn expressions of outrage and solidarity from the four corners of the earth.
Nevertheless, as a Church, we follow in the example of these martyrs, who are now removed from the violence of this world and reunited with their Heavenly Father. Just as they remained true to their faith in the face of such barbarity, and invoked the name of our Lord Jesus even until their last breaths, we also cling to our beloved Father during this time of mourning, in the knowledge that, through His love and grace, we are empowered to overcome any evil.

We pray also for the protection of our beloved Church, our beloved homeland, and the brave Egyptian leaders and military personnel who are taking actions to protect their people throughout the world. As a Diocese and a community, we remain united in prayer for an end to all violence, and in gratitude to our Lord who, through His love, has endowed us with a spirit of triumph over evil.

Many other leading figures, bishops and priests from all demonimantions and religions of countries all over the world have issued statements condeming the actions of ISIS. This is proof that through persecution our church becomes stronger as we all come together in faith.

Names of the martyrs:

Please remember them and their families in your prayers.