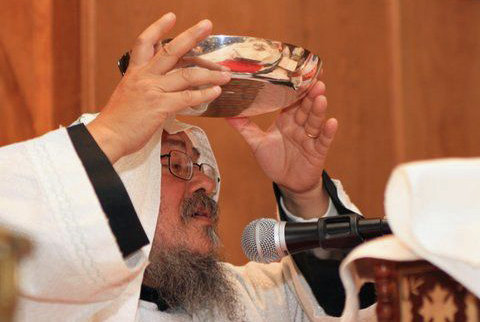 The Centre of Christian Worship

2. Secondly the intense spirituality of the prayers with the final eating and drinking of the Body and Blood of Christ; not only gets us close to God but binds us together in Him as His body just as He intended. “For we are members of His body of His flesh and of His bones” Eph 5:30. Something we must be very thankful for.

3. Also we acknowledge the incarnation, Crucifixion, Resurrection, Ascension and Second Coming in the Eucharist Liturgy so we give thanks for the Salvation brought about as a result of these things.

Hence the Priest says ‘Let us give thanks to the Lord”, and the people reply, “It is right and worthy”

A Sacrament of the Church

A sacrament is a visible manifestation of a hidden mystery. The bread and wine is actually the Flesh and Blood of Jesus Christ.

Proof of this belief

John 6:30 took place in the synagogue at Capernaum. The Jews asked Jesus what sign he could perform so that they might believe in him. As a challenge, they noted that "our ancestors ate manna in the desert." Could Jesus top that? He told them the real bread from heaven comes from the Father. "Give us this bread always," they said. Jesus replied, "I am the bread of life; whoever comes to me will never hunger, and whoever believes in me will never thirst." At this point the Jews understood him to be speaking metaphorically.

Jesus first repeated what he said, then summarized: "‘I am the living bread which came down from heaven; if any one eats of this bread, he will live for ever; and the bread which I shall give for the life of the world is my flesh.’ The Jews then disputed among themselves, saying, ‘How can this man give us his flesh to eat?’" (John 6:51–52).

His listeners were stupefied because now they understood Jesus literally—and correctly. He again repeated his words, but with even greater emphasis, and introduced the statement about drinking his blood: "Truly, truly, I say to you, unless you eat the flesh of the Son of man and drink his blood, you have no life in you; he who eats my flesh and

drinks my blood has eternal life, and I will raise him up at the last day. For my flesh is food indeed, and my blood is drink indeed. He who eats my flesh and drinks my blood abides in me, and I in him" (John 6:53–56).

Notice that Jesus made no attempt to soften what he said, no attempt to correct "misunderstandings," for there were none. Our Lord’s listeners understood him perfectly well. They no longer thought he was speaking metaphorically. If they had, if they mistook what he said, why no correction?

On other occasions when there was confusion, Christ explained just what he meant (cf. Matt. 16:5–12). Here, where any misunderstanding would be fatal, there was no effort by Jesus to correct. Instead, he repeated himself for greater emphasis.

In John 6:60 we read: "Many of his disciples, when they heard it, said, ‘This is a hard saying; who can listen to it?’" These were his disciples, people used to his remarkable ways. He warned them not to think carnally, but spiritually: "It is the Spirit that gives life, the flesh is of no avail; the words that I have spoken to you are spirit and life" (John 6:63; cf. 1 Cor. 2:12–14).

But he knew some did not believe. "After this, many of his disciples drew back and no longer went about with him" (John 6:66).

This is the only record we have of any of Christ’s followers forsaking him for purely doctrinal reasons. If it had all been a misunderstanding, if they erred in taking a metaphor in a literal sense, why didn’t he call them back and straighten things out? Both the Jews, who were suspicious of him, and his disciples, who had accepted everything up to this point, would have remained with him had he said he was speaking only symbolically.

But he did not correct these protesters. Twelve times he said he was the bread that came down from heaven; four times he said they would have "to eat my flesh and drink my blood." John 6 was an extended promise of what would be instituted at the Last Supper—and it was a promise that could not be more explicit.

Those who do not believe comment that John 6 asserts that one can show Christ was speaking only metaphorically by comparing verses like John 10:9 ("I am the door") and John 15:1 ("I am the true vine"). The problem is that there is not a connection to John 6:35, "I am the bread of life." "I am the door" and "I am the vine" make sense as metaphors because Christ is like a door—we go to heaven through him—and he is also like a vine—we get our spiritual sap through him. But Christ takes John 6:35 far beyond symbolism by saying, "For my flesh is food indeed, and my blood is drink indeed" (John 6:55).

He continues: "As the living Father sent me, and I live because of the Father, so he who eats me will live because of me" (John 6:57). The Greek word used for "eats" (trogon) is very blunt and has the sense of "chewing" or "gnawing." This is not the language of metaphor.

“And He took bread, gave thanks and broke it, and gave it to them, saying, “This is My body which is given for you; do this in remembrance of Me.”

Likewise He also took the cup after supper, saying, “This cup is the new covenant in My

In this passage apart from Jesus clearly saying, “this is My body”, he also uses the words “do this in remembrance of Me”. The Greek word for remembrance is anamnesis. In the Greek there are two words for remembrance, one used for those who have died and anamnesis used for those who are alive but far away. So He is a Living remembrance therefore not a symbolic act for someone gone, but a real calling of someone still alive. It also indicates that Christ is alive forever, making the sacrament eternally established and the same every time it is prayed.

3. St Paul’s Letter to the Corinthians

4. Writings of the Fathers

Whatever else might be said, the early Church took John 6 literally. In fact, there is no record from the early centuries that implies Christians doubted the nature of the Eucharistic Sacrifice. There exists no document in which the literal interpretation is opposed and only the metaphorical accepted.

The Didache (writings of the Apostles) states that only the Baptised may partake of the Eucharist. Those not baptised could pray, and join in all activities except eat the Holy Communion, as it was for the Holy only.

Ignatius of Antioch, who had been a disciple of the apostle John and who wrote a letter to the Smyrnaeans about A.D. 110, said, referring to "those who hold heterodox opinions," that "they abstain from the Eucharist and from prayer, because they do not confess that the Eucharist is the flesh of our Savior Jesus Christ, flesh which suffered for our sins and which the Father, in his goodness, raised up again" (6:2, 7:1).

Forty years later, Justin Martyr, wrote, "Not as common bread or common drink do we receive these; but since Jesus Christ our Savior was made incarnate by the word of God and had both flesh and blood for our salvation, so too, as we have been taught, the food which has been made into the Eucharist by the Eucharistic prayer set down by him, and by the change of which our blood and flesh is nourished, . . . is both the flesh and the blood of that incarnated Jesus" (First Apology 66:1–20).

Origen, in a homily written about A.D. 244, attested to belief in the Real Presence. "I wish to admonish you with examples from your religion. You are accustomed to take part in the divine mysteries, so you know how, when you have received the Body of the Lord, you reverently exercise every care lest a particle of it fall and lest anything of the consecrated gift perish. You account yourselves guilty, and rightly do you so believe, if any of it be lost through negligence" (Homilies on Exodus 13:3).

Cyril of Jerusalem, in a catechetical lecture presented in the mid-300s, said, "Do not,

therefore, regard the bread and wine as simply that, for they are, according to the Master’s declaration, the body and blood of Christ. Even though the senses suggest to you the other, let faith make you firm. Do not judge in this matter by taste, but be fully assured by faith, not doubting that you have been deemed worthy of the body and blood of Christ" (Catechetical Discourses: Mystagogic 4:22:9).

Even Roman persecutors claimed the Eucharistic Liturgy as an act of cannibalism to encourage the continued persecution of the Church. This shows that the teachings were twisted because the preaching heard was that of a real body and blood to be eaten.

In the Early Church there were several texts, all with similar structure and pattern throughout the different Churches of Alexandria, Antioch, Jerusalem and Rome. These continued to be altered maintaining a few key common phrases and the same spirit and aim.

The Church of Alexandria by the 4th Century had a few liturgies. Of those three remain in use and have remained unchanged since the 4th Century. This makes us extremely fortunate as we have the least variation in the original Eucharistic prayers and many scholars still study our liturgy to understand prayer from the first centuries of the Church.

The most common liturgy is St. Basil the Great’s (330-370AD) addressed to the Father.

The second most used is St. Gregory the Theologian’s (329-389 AD) addressed to the son.

The least used is St. Cyril’s (died 444AD), which was originally written by St. Mark and edited by St. Cyril the 24th Patriarch of Alexandria.

Every single day of the Coptic Church has the canonical hours (seven Agbeya prayers) and the Psalmody (Evening Praises). These must be done on days when the Eucharist is also prayed.

The spirit of the Church prayers can be immediately felt when walking into the church as the tune for the hymns changes depending on the occasion in the calendar. Feasts have a joyful tune, Lent, the Apostles Fast, Palm Sunday, Passion Week all have unique hymns and tunes.