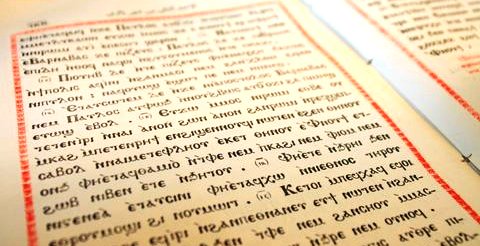 What is the Coptic Language?

Coptic was the language spoken by the Egyptian people when St. Mark introduced Christianity to Egypt. It remained the predominant language till the Arab invasion when Arabic became the main language. Despite this the Church has preserved its rites and hymns in its original Coptic until today.

Why is it important?

Coptic language is inseparable from our identity as Coptic Christians.

When we pray in Coptic our hearts and spirits are in harmony with the desert fathers, martyrs, patriarchs and all the Egyptian people for almost two thousand years. Beyond the church Coptic is the bridge that links us with our ancient Egyptian roots a period of time spanning over seven thousand years allowing us to proudly associate ourselves with Early Christianity and with the Pharaohs of the Great Egyptian Civilization.

As such Learning Coptic is not a waste of time nor should it be considered a dead language given its revival in the last century (It is still spoken in some villages in Egypt).

Another vital benefit is that it has a wonderful unifying function in that no matter what language you speak or what country you are in. It is possible to enter any church and pray together share in the sacraments and raise your voices as one using our Coptic language. This makes the Coptic language integral to our practice in the church.

Thirdly it allows you to pull out all the hidden deep spirituality from the many hymns and services our church provides, especially the intensely deep and beautiful prayers of Holy week.

Beyond the prayers there are many great spiritual treasures still written only in the original Coptic: Sermons, manuscripts and Bible commentaries written by many fathers of the church such as St Shenouda, St. Pachomious and St. Anthony.

Finally to be associated with the Coptic Language is a reminder of our great history and a marker to all other churches of who we are and where we came from.

Overview of its origins

Ancient Egyptian language dates back to 5000 BC and was written in several scripts; hieroglyphic, mainly for monumental inscriptions by the priests (hieroglyphic is a Greek word meaning “holy inscriptions”); hieratic, a cursive form of hieroglyphics used for documents on papyrus such as state records and business transactions; and an abbreviated form of hieratic called demotic meaning “related to the people” which came about around 710BC and became the main form of expression at the time.

As Egypt’s powerful civilisation started losing its grasp in 332BC no resistance was offered to the incoming army of Alexander the Great. Within a year of his arrival he was proclaimed divine by the oracle of Amun Re the priests of Egypt. The hieroglyphic language was gradually being lost and the hieratic and demotic was not easy to express due to a lack of vowels.

Over a period of hundreds of years the Egyptian people adopted the Greek alphabet to express there written script adding demotic letters for the sounds not made by the Greek. Eventually the Coptic language was formed using the 24 letter Greek alphabet and 7 demotic letters.  The first evidence of Coptic in written texts dates to the 1st Century AD indicating it was well in use by the arrival of St. Mark to Egypt by 51AD.

Coptic quickly developed its own grammar and orthography and became the dominant language of Egypt as it was used to spread Christianity outside of Alexandria to the non-Greek speaking towns and villages. The earliest Christian documents written in Coptic date back to the 3rd Century and many original documents have been found written in Coptic. None more valuable than the extensive writings of St. Shenouda the Archmanadrite. He wrote beyond the monastic matters addressing many of the peoples needs and even simplified St. Cyril the Great’s theoretical theology for all people to understand and apply.

It is not known how many dialects existed but by the time the Coptic language was in full use there were five main dialects:

Sahidic has become the classical literary form of Coptic mainly because it is the dialect chosen by the Great Saints Shenouda and Pachomious in all their writings. But for the scholar it holds great importance as the manuscripts of Nag – Hammadi were all written in Sahidic.

In 641 AD came the Arab invasion seeing a decline in Christianity and the Coptic Language. By the 11th Century manuscripts began to appear in Coptic and Arabic. Two centuries later Arabic had almost eliminated the Coptic Language. The Bohairic was kept alive by its use in the Church, the priests continued to communicate with it in the sanctuary and did so very diligently despite many pressures and through some very dark times up until modern day where the Coptic language is very much alive in the Church and more and more people are learning to use it.  Our Holy texts and Hymns have been preserved unchanged from when they were written and are in regular use.