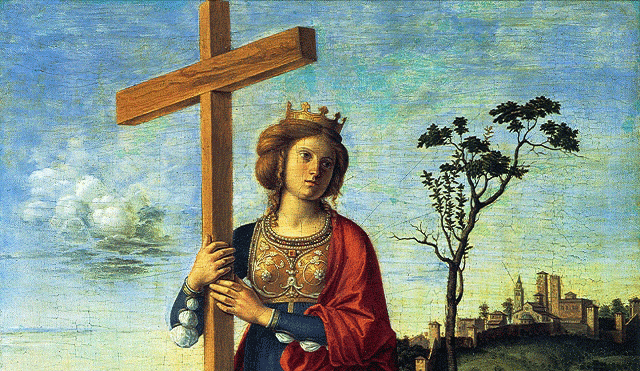 The Orthodox Coptic Church celebrates her feast on the 9th of Bashans, (the 17th of May), the day of her death in the year 327 AD, and we also remember her on the 17th of Tot, (the 27th or the 28th of September), the day of the feast of the Cross.

The Church also remembers her in the assembly of saints in the prayers of the "Psalmodia", asking for her prayers and the prayers of her son the Emperor Constantine Our brothers the Orthodox Greeks build churches on her name, and they celebrate her feast and the feast of her son on the 21st of Ayar. The Latin Church celebrates her feast on the 18th of Aab (August).

Her son Emperor Constantine honored her. He gave her the surname "Augusta", meaning queen. He gave her the power over the Imperial treasures. She spent generously and liberally on the construction of churches. She gave to the poor and the needy persons and cities.

The historian Eusebius of Caesarea said about her, that during her wandering in the Eastern States, she presented numerous proofs of her magnanimity as an Empress, and of her imperial generosity upon the inhabitants of the various cities as communities and upon the individuals, as well as she offered many aids with the utmost lavishness. She gave money to some, and big quantities of clothes to others. She liberated some from prisons, or from the slavery of service in the mines. She delivered others from the violence of persecution, and brought back some others from exile (K3 F44).

She was very religious. She went to church, with simple modest clothes, although she was an empress, and she stood with all veneration among the masses. She was constant in her prayers, and she attended the religious celebrations, and lived as a worshipper more than she lived as a queen. She visited the holy places, bearing the fatigues of travel in her old age.

The Lord suggested to her in a vision, to go to Jerusalem, and to search exactly for the place of the glorious Cross.

She went there, and inquired, and discovered three crosses. Saint Macarius, the Bishop of Jerusalem, accompanied her. God manifested the holy cross with a miracle, as it appears in the synaxaire of the 17th of Tot.

She placed the cross in a golden box, and gave it to the bishop, and she kept a part of it for her son Constantine who placed some of the holy nails in his protective covering.

Saint Helen constructed a church in Bethlehem, at the cave where our Lord was born, and she built another one on the Mount of Olives, at the place of the Ascension of the Savior.

She began the construction of the church of the Resurrection. Her son the emperor Constantine presented to her all that was necessary for her holy work. He sent letters in relation to that, to the governors and to the bishops.

This saint specified numerous unalienable properties for the churches and the monasteries, and for spending on the poor. She celebrated a feast in Jerusalem for the sacred virgins, and she herself served them.

She built a church on the name of the martyr saint Luciano in the town where she was born, which her son called Helenopolis on her name Helen, in her honor.

This saint died in 327 AD at the age of 84 years. She wrote her testament to her son the Emperor, and to her grandsons the Caesars, inciting them to be firm in the life of faith and justice.